I’m taking a trip down memory lane as we take a look back at the now virtually demolished Hellingly Hospital.

Having seen a couple of recent blog posts from my Twitter and Flickr friends Mark and Viveca about their recent visit back to Hellingly hospital, and their reports on how it has now been virtually demolished, I thought I’d start a short series of posts looking back at the photos I got throughout my four or five visits to Hell.

Here is a brief description from Wikipedia:

“Hellingly Hospital was a large mental hospital in the village of Hellingly, east of Hailsham, in East Sussex, England. The hospital, also known as East Sussex County Asylum or just Hellingly, was opened in 1903. Its architect was G T Hine, one of the great asylum architects of the era.

The hospital boasted its own railway line, the Hellingly Hospital Railway, used principally for transport of coal. This branch line led from the main line to the boilerhouse. The hospital also had a vast laundry, ball room, patients’ shop, sewing rooms, nurses home, extensive grounds, and an advanced utilities network for its time, including a large boilerhouse and a water tower. It followed the compact arrow plan for the main hospital, with separate villas surrounding this.

The majority of the hospital closed throughout 1994, however, and to this day much of the 25.4 hectare site stands derelict and extremely run down, after suffering repeated vandalism and multiple arson attacks.”

Someone will have to edit this very soon.

View through a corridor window looking across to the water tower towards the lower block.

It was my friend and work colleague Rob that first had an interest in going as he was looking for something new to photograph. After doing some research on Google, he found that a bunch of local graffiti artists had ventured in and set about doing their thing. When he told me about this a visit was inevitable. This was back in early 2008 and up until that time I was concentrating mostly on landscape and nature photography, urban exploration was new to me and I didn’t realise it would have such an effect on me, taking my photography in a whole new direction. It was in mid March of 2008 that both of us ventured onto the site (although I believe Rob had taken a trip in once already), and with no signs of permanent security we just drove up and parked up opposite the admin block, which was nothing but a burned out shell. A quick scan of the perimeter fence and we were in, my eyes lit up, I was like a kid in a candy shop. Photographic Heaven in the bowels of Hell!

And so began my journey into the world of UrBex photography.

All the pics that I’ll be posting were taken between March 2008 and December 2009, in fact on our last visit where I did some fun Xmas pics we both got rumbled by security upon our exit. Sadly I did not get the opportunity to visit during 2010 and it seems like it is now too late for me to get back before it’s all gone. 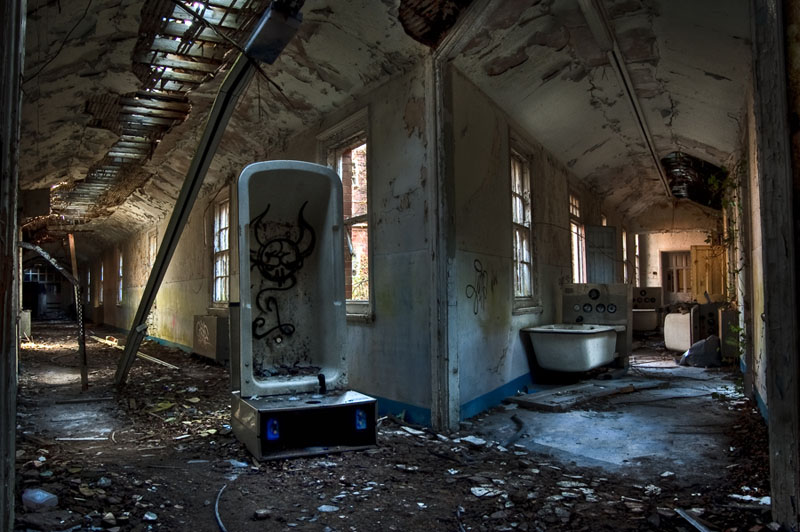 One of my favourite corridors. Most were empty but the baths found in this one had a haunting feel to me.

Some hate graffiti but I personally love it. I think the combination of art and dereliction tend to compliment each other very well. This room was so damp that even after just a couple months this work was already in a bad state.

More work to come. Thanks for stopping by.

5 thoughts on “Memories of Hell Pt1”