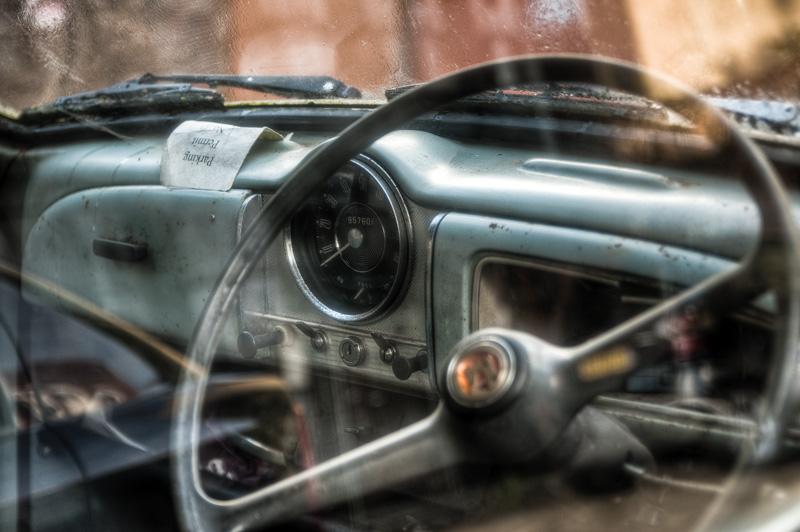 Another shot from the trio of rusty cars I found the other week.

I had mentioned in an earlier post that I was keen to get an interior shot of one of the cars, but unfortunately all the doors were either locked or jammed. I did accidentally pull the back door off this Morris Minor as the wood frame had totally rotted away, but there was too much junk in the back to try to climb through, plus I was wearing a half decent pair of jeans that I wasn’t prepared to ruin.

I was really taken with the view through the drivers window and though initially I would have preferred to have shot this without looking through the glass I now think that it has worked out for the better. I’m rather fond of the reflections and think this helps with the overall effect, making you feel like a person who is having a nose around.

I love how simple cars used to be too. No air-con or fancy electrics, even a radio was probably a luxury in some cars, and with the amount of fancy gadgets to go wrong in modern vehicles I sometimes wonder if going back to more simple controls wouldn’t be that bad of an idea. I could live without having to use a choke though. I remember having to use a washing peg to keep the darn thing out during the winter months.

On a separate note, I would like to thank all of you who have visited, commented and spread the word over on  Twitter. I’ve only been doing this for a week and the response I’ve had has been fantastic. Cheers!

4 thoughts on “A glimpse of the past”