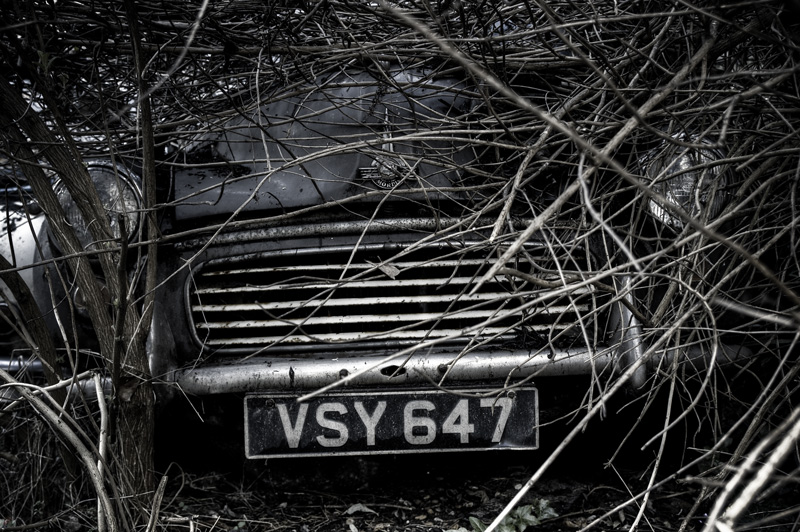 Sometimes it takes a little while to decide on how to process an image, if at all, and this is one of them. The car itself was almost all obscured by trees and twigs but there was enough showing at the front to make an interesting picture. I like the way nature has enveloped it, as if to hide it from view as it slowly decays.

I had an idea that I wanted to remove the colour from the scene to help enhance the sombre feel. Sepia toning was my first thought but something didn’t sit right when I applied it. Then I had an idea…A while back I had put an exposure through Photomatix to try and enhance the grunge within the scene, this was then exported back into Lightroom and I started to play with the different presets the you can use to give your pictures certain appearances. And what a difference these effects have on your photos after being tonemapped. I found that the one that really stood out was the ageing preset, though initially blowing the highlights and giving a bleached out look, this could be easily brought back playing with the exposure and brightness sliders. It was a revolution in how I was to go about working on some of my images, especially my dereliction shots.

So this was to be the approach I used for this shot, and it worked a treat. I was still unhappy with the slight sepia colouration that the preset gave, so I changed the colour temperature sliders until I settled on this very subtle blue tone. With some additional dodging and burning and a slight vignette I eventually ended up with a shot that satisfied the initial feel that I had in mind.

So have a play with those presets, not as a one click solution, but as a bases to take your shots in a different direction. Remember, photographers have been working on and changing how they present their work for years and years, well before the digital age. I was listening to a recent podcast from Chris Marquardt interviewing a chap by the name of George Smyth who develops his pictures using a process called Bromoil . It was very interesting indeed and although this is very different from my working digitally, the ethos is very much the same. I highly recommend checking the podcast out.

6 thoughts on “In the undergrowth”